Welcome to TWIC, this week (actually tomorrow) is my blogs first anniversary and I have celebrated with my first silk card. 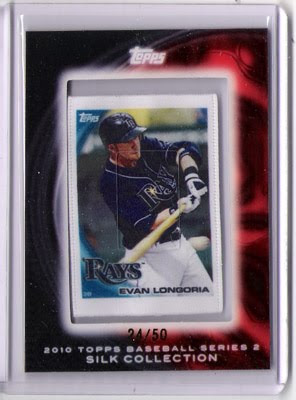 It is thick, kind of expected that
there is plastic surrounding it
so it slides around, wasn't expecting that
and there is a square opening
so you can feel the silk
very interesting and nice to have
probably will be my only silk card though
as i am not blown away by it

I guess that about does it for This Week in Cardboarding, thanks for checking TWIC out and i hope you have an awesome week and score some great cardboard :)
Posted by chris OK at 11:11 AM No comments:

Welcome to Last Week in Cardboarding, this is a late and will be another discounted blaster from Walmart. Went with a Masterpiece blaster, just for the fun of it :) 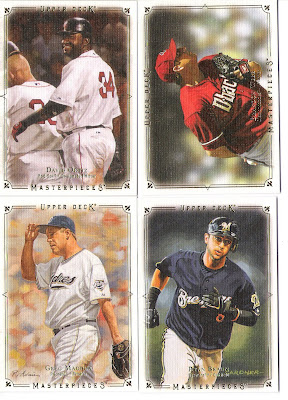 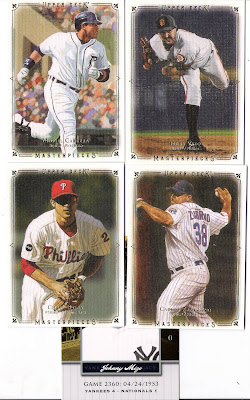 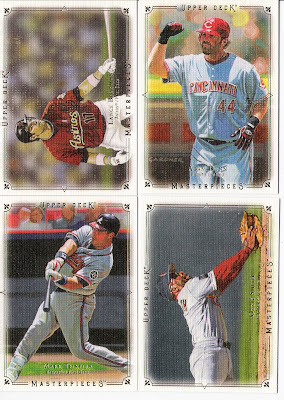 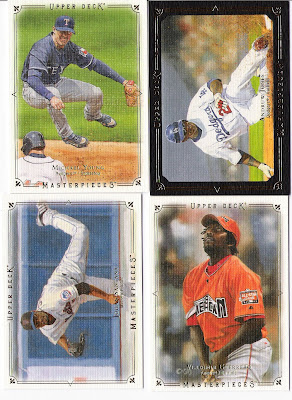 my first frame card, pleasantly surprise
just wish it was someone i liked
Young great action and Vladdy sporting the orange :)
Pack 5 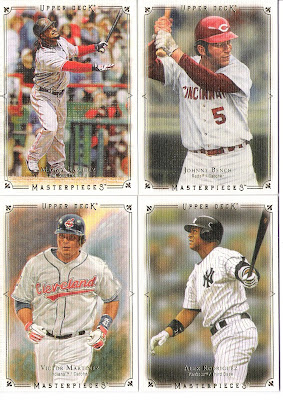 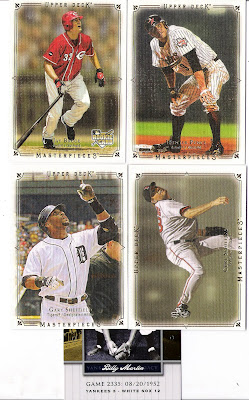 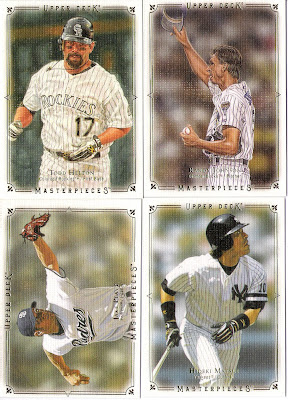 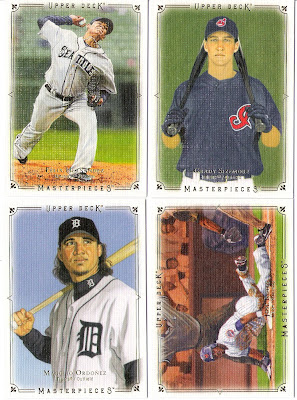 Still really enjoying these cards, the photos, the thick cards, and the old timers, really give a fun break. I really like how the Yankee inserts don't take the place of a regular card. Thanks for checking out this late edition of TWIC.
Posted by chris OK at 7:45 PM 3 comments:

One More Pack! was kind enough to offer some cards up for my Heritage set, just a few so I signed up at Zistle to check out his player collections, then gathered a few cards together to send him back some player collection cards he was missing.

some nice cards, hope the Thomas wasn't meant for someone else
because i really like it :) but let me know and i'll return it if you need it

Only he didn't just send some set help. He also sent some awesome player collection cards.

First up, the Rays:
CYMTO Longoria, sweet
Opening Day Upton, nice
and my fav of the bunch
also an 09 A&G and 2 Documentary
featuring Upton,
THANK YOU! Very much 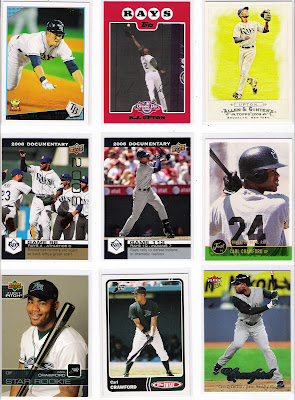 Then a Just Minor card of CC
looking all kinds of young, at age 18 not to shocking
then 2 03 cards of CC, very fun
great additions
THANK YOU! THANK YOU!!

But wait he wasn't done because then there were some ICHIROS 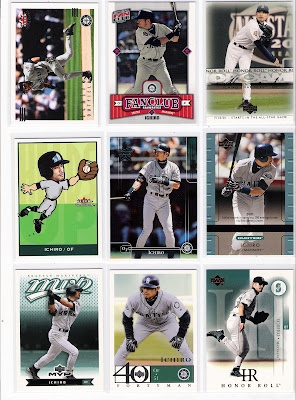 Did i say some, i meant a whole plethora of ICHIROs 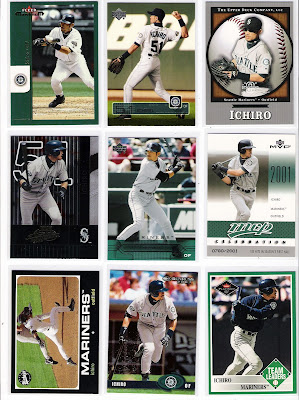 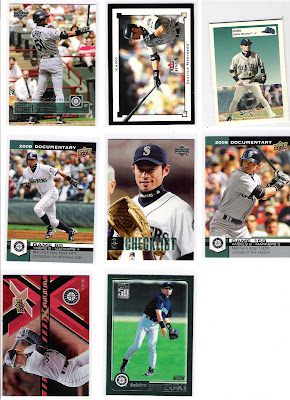 There was a plethora of discounted blasters at my local walmart 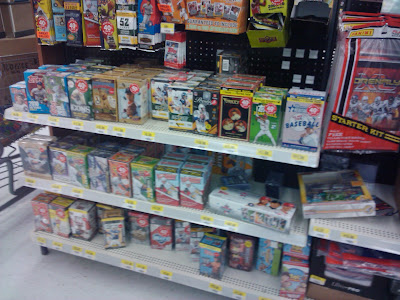 The normal section.... but wait another register had a whole other section

eeh gads the blasters are expanding 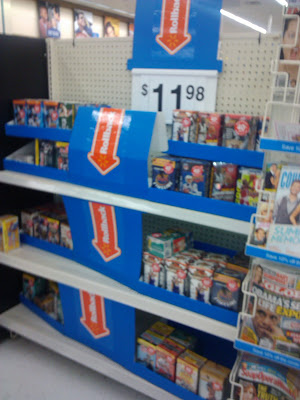 WOW! Check This OUT

Just had to share this, A 2008 Masterpiece Black Framed Set, there are many photos with this listing too.

For under $40 shipped, what a great deal, i really thought about placing an offer but just couldn't pull the trigger. If a fellow blogger or reader won this, kudos.
Posted by chris OK at 7:01 PM 1 comment:

Welcome to TWIC!!! I found some blasters i was actually interested in at the local Wally World and the best part is that they were 40% off, not as great as 50%, but good enough for me. I decided to go with an 08 UD Baseball Hereos Blaster for nine bucks. These are the first packs i have ripped of the product but i am a little familiar with the cards since i have received some of the cards via trades. On to the break: 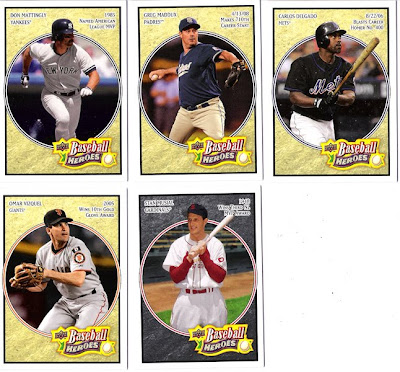 Stan the Man
and
Mattingly
UD is letting us know they are MVPs
ummm... DUH!! 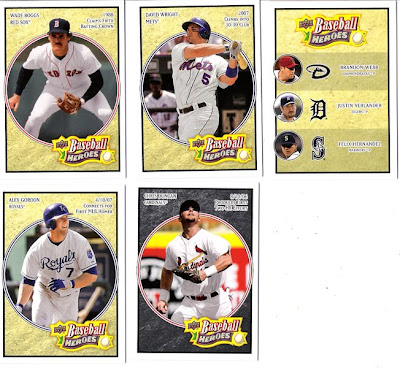 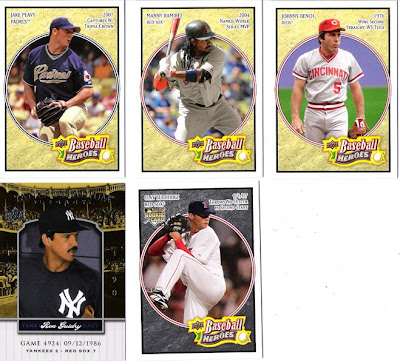 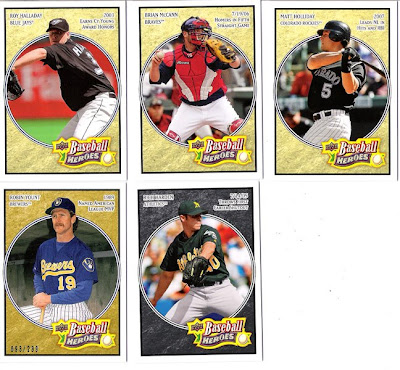 McCann "Homers in Fifth Straight Game"
really a fielding photo, maybe a hitting would have made a little more sense
Yount serial numbered and odd color background
my hit 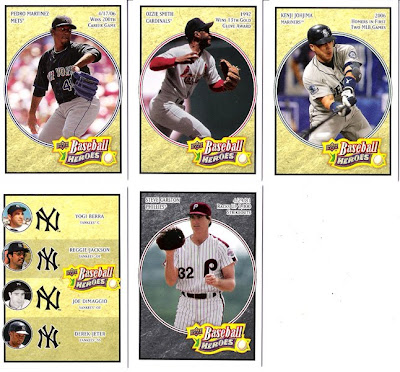 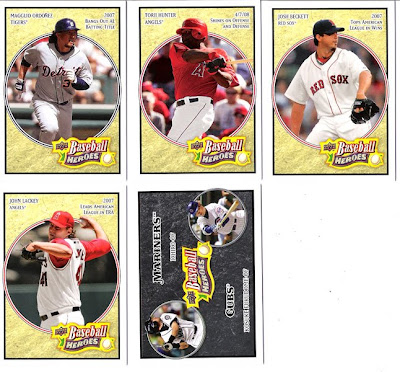 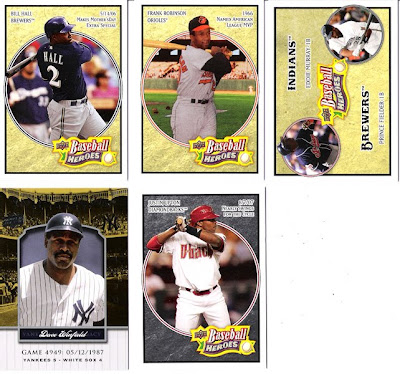 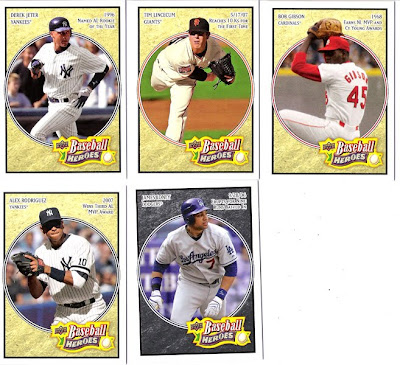 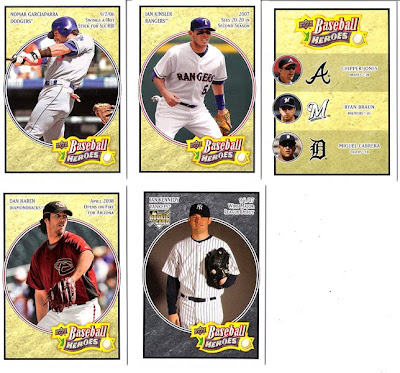 I really like these cards, i find the facts a nice touch, its just when UD reaches to include someone, they should have realized that maybe they shouldn't be in the set. The cards are thick and the pictures are sharp along with a classic design, very fun blaster.

Thanks for checking out TWIC.
Posted by chris OK at 10:25 AM No comments:

Welcome to This Week in Cardboarding, I am sooooooo exhausted, this week i have been stripping a 30 year old hutch and have been very consumed in the garage and far away from the cardboarding world.

Here is what i picked up thanks to the bay of e: 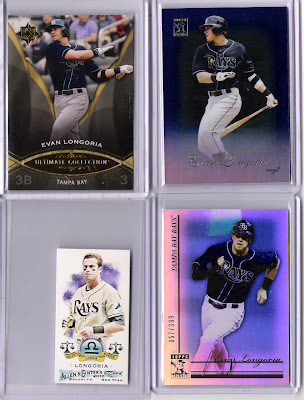 Thanks for checking out TWIC, hope you have a wonderful week :D
*Sorry but my Sunday comic will be skipped this week and this is why my Rays Sketches have been on pause.
Posted by chris OK at 11:11 AM No comments:

there would be a salary cap. 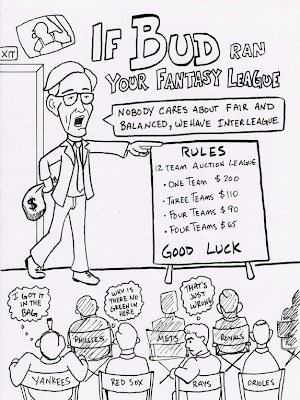 Since the Rays and Yankees are going head to head again, I figured why not finally post this thought. The thought originated back on May 19th, while watching the Rays and Yankees game. Now that my drawing side has surfaced again, I was inspired to do a drawing to enhance my opinion. Of course living in NY, the game was broadcasted on the YES network - which I usually don't mind, actually I usually have it muted, too much Yankee propaganda is bad for the brain, but this time I was actually listening, and the commentators started saying that Crawford will not be resigning with the Rays, like its a forgone conclusion, and of course Pena will have to take a huge cut if he wants to stay and there is no way they will be able to afford Soriano if he continues what he is doing, well he is continuing to pitch very well. The good news is, not only did the Rays beat the Yanks but they only brought it up that one time. I really hope the Rays keep Crawford and sign him. Its good for baseball when there are legacy players, you know the players that are only associated with one team, ie Sandberg, Ripken, Gwynn, Biggio, etc.

Here are some random facts and my argument for a salary cap.

Based on the 2010 Salary Budget. There are eight teams over $100 million, that means there are twenty-two not yet spending $100 million or put another way, two-thirds of the MLB teams are spending less than $100 million. One team has a salary above $200 million. That one team is more than double two-thirds of the league, and triples twelve teams. Pretty easy to tell things are not balanced and favor only a few teams.

Now imagine if you were in a fantasy league where one owner had a budget that is twice as much as two-thirds of the owners and triples on-third of the league.

It isn't set up for fair competition.

MLB needs a fair and balanced system and therefore should have a salary cap.

chris OK
I am a baseball junkie and this is my way to communicate to the Baseball Gods, and other fans.

Teams
Rays (from FL, lived 6yrs in Sarasota been to the Trop a few times)
Red Sox (1st MLB game at Fenway before FL had any teams)